AWB Nigeria members, Mrs. Joy Olayiwola and Mr. Uche Chukwu have recorded a milestone achievement with their immense contributions that led to the discovery of the Asteroid 2021-RZ190 which is considered as the most eccentric when compared to other discoveries by African teams.

This notable feat was achieved under the auspices of Astronomy Without Borders (AWB), in collaboration with the International Asteroid Search Campaign (IASC) with the aim of conducting worldwide ground and Space based surveys that are geared towards tracking and periodic studies of minor planet bodies.

Olayiwola who explained in an interview that the Asteroid found was a near-earth asteroid (NEA), which might pose a danger to other planets especially Earth if it veers off its orbit, added that, the leading astronomy bodies such as the International Astronomical Union (IAU) and the National Aeronautics and Space Administration (NASA), have surveys all around the world to track these asteroids.

She further explained that lots of data collected every day during these activities are made available by IAU to people who are passionate about space technology like herself. These images are later analyzed and whatever is discovered is credited to the researcher and also the discoverer gets the privilege of naming the asteroid after seven to eight years from the discovery date.

Olayiwola noted that independent research from both renowned and amateur researchers is instrumental in supporting the international community, thereby helping to keep the planet safe.

She however urged relevant authourities to invest and encourage the development of Space research especially those with passion for Astronomy and Space Science, adding that those with such interests should remain motivated against all odds and pursue professions in space research.

According to reports, eleven Nigerians have so far discovered three Asteroids in the history of space Astronomy. 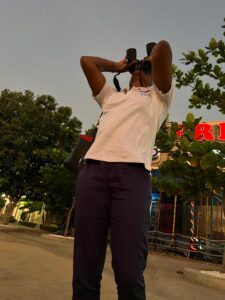