In this year 2020, Earth has witnessed eclipses a number of times, including both lunar and solar, about six (6) of them. The forthcoming would be the sixth and the last for this year, a total solar eclipse.

We witness solar eclipses or eclipse of the Sun not only because the New Moon gets positioned and aligned in-between Earth and the Sun. But because of the simple reason that the Sun’s diameter is approximately 400 times larger than the Moon. And Sun-Earth distance is also approximately 400 times the Earth-Moon distance. So from simple geometry, relative to the Earth, the Moon and the Sun appear to be the same size.

During total solar eclipses, as the Moon continues to transit, its shadow creates a path called the Path of Totality on the surface of the Earth. Regions around this path will observe Partial solar eclipse. And for any given point on the Earth which has witnessed a total solar eclipse, will see another round of it in the next 400 years.

This upcoming total solar eclipse dubbed the Great South America Total eclipse will make first appearance as a partial solar eclipse at the Southern Pacific Ocean by 1:34 p.m UTC and about one hour later, that is,  at 2:32 pm UTC, the Moon’s umbra will fully emerge. Both will then proceed due East, touching some parts of South American Continent like: Chile and Argentina.  And will come to a halt over the Southern Atlantic Ocean, of the coast of Southwest Africa at 6:53 p.m UTC.

The event can be viewed on several astronomy channels worldwide.

You can follow NASA guidelines on observing solar eclipses.

Wishing you all a favorable weather conditions.

On the 21st of this month of June, our planet Earth will witness the 3rd out of six (6) rounds of eclipses scheduled for the year 2020. The first two eclipses were lunar eclipses which occurred on January 10th and June 5th. They were both observed from Africa. The forthcoming will be a solar eclipse. The remaining three (3) will be: July 5th Lunar eclipse, November 30 Lunar eclipse and December 14 Solar eclipse.

WHAT IS A SOLAR ECLIPSE?

This occurs when the moon comes between the Sun and the Earth in such a way they become so aligned or almost aligned in a straight form.  This results in some parts of  the Earth to be partially of totally obscured from the rays of sunlight. Solar eclipses can as well be called “eclipse of the Sun” and it should be noted that it happens during new moon but not during all new moon.

Image showing during solar eclipse, the moon is between Earth and the Sun. Image credit: NASA

There are three (3) but four (4) types of solar eclipses:
Partial
Total
Annular
Hybrid 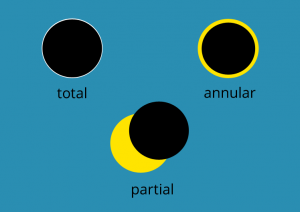 Partial solar eclipse is the most recurring and can  be seen alongside with each of the aforementioned three. It can occur alone. In such case there is no perfect alignment, so Earth transits along the  diffuse shadow  of the moon called the penumbra 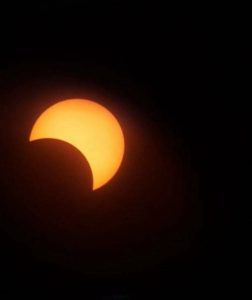 Total solar eclipse is the most thrilling of all the solar eclipses. It occurs when the moon is in a perfect alignment and at its perigee to Earth. As a result of that, the Sun’s disk becomes completely blocked. Regions under the Umbra of the shadow of the moon experience total darkness, and as indicated earlier, regions of the world not under the umbra experiences partial solar eclipse (that is, penumbra). To have the best view of the Sun’s Corona, it is during total solar eclipse. It is not only the best but the only moment to do so. Note: Total solar eclipse occurs ones in every two years somewhere on Earth but any region of the Earth that has ever experienced it will encounter it again in the next 400 years counting from the year in occurred last there.

On June 21 of this year, we will experience Annual solar eclipse across some parts of: Africa, South – East Europe, Asia and the Pacific.

Regions of the African continent that will come under path of Annularity are: Republic of Congo
Democratic republic of Congo. Central Africa republic
South Sudan
Sudan
Ethiopia
Eritrea
and Into the red sea and beyond.

Nearby countries to these aforementioned ones will experience ONLY partial solar eclipse (penumbra). Every other person can stream it live from this link.

Starting from the Republic of Congo, it will kickoff as a partial solar eclipse at 4:46 a.m (GMT + 1) and then Annular by 5:47 a.m (GMT + 1) an will then move to the East according as depicted on the map below.

So if you are in or around these mapped locations and you do want to witness this event, you have to be on the guide from 04:46 a.m (GMT + 1), because  for a given point it will last for less than 3 minutes. the whole event from Africa to Asia, from Penumbra to Annular and back to penumbra will last for 5hrs, 38 minutes.

It is very dangerous to look at the sun with your naked eyes, binoculars or telescope. This Handbook and Posters (1, 2, 3, 4, 5, 6, 7) designed by the African Astronomical Society explains all about the eclipse and how to see it. A free android app on the eclipse has been developed by Alok Mandavgane for the Astronomical Society of India, and adapted for Africa.

Wishing you all a clear skies on June 21st