The Astronomers Without Borders (AWB) Nigeria with the support of the Nigerian Army, from the 10th -14th June, 2019 embarked on a trip to Brussels, Belgium with a team from the NAOWA College, Abuja for a first of its kind Space Experiment organized by the ASGARD IX program.

The experiment, which involved flying some selected Nigerian Vegetable seeds to the edge of Space through a Stratospheric Balloon in an attempt to determine the effects of the near space conditions on the seeds.

The NAOWA College team, which comprised the School Principal, a Science teacher and 5 Science students together with the Project facilitators from AWB, participated in a number of other educational activities aside the Stratospheric Balloon Experiment during their stay in Brussels, Belgium.

The team had a guided tour of MIRA Observatory, where they received a lecture from Phillipe Mollet, a MIRA Observatory Astronomer. The students also participated in a number of hands-on activities. The Observatory tour afforded the students the opportunity to see and use different kinds of Telescopes and other astronomical equipment.

The team also visited the Belgium National Museum, where they had a guided tour of the different sections of the museum, the museum visit was particularly educative as it afforded the students the opportunity of understanding the history behind some of the science-based discoveries.

The team was at the Belgium Royal Observatory, where the NAOWA College students had the opportunity of meeting with the first Belgian Astronaut, Dirk Frimout. The students made a presentation of their experiment to the astronaut and his team. There were also lectures by Astronaut Dirk Frimout and Prof. Katrien Kolenberg, a lecturer and foremost Astrophysicist from the Antwerpen University, Belgium.

The school experiment was flown to the edge of Space on a Stratospheric Balloon by the Royal Metrological Institute at their Uccle launch site.  This was the highpoint of the visit as the excited students and the team watched with amazement as balloon disappeared into the clouds bearing the school experiment.

The NAOWA College students during this visit, had the opportunity of visiting the Sint-Pieterscollege, Brussels on a guided tour of the school and a visit to the science laboratories, where the students had the opportunity of having a hands-on Space experiment in the Physics laboratory with the award-winning Physics teacher and ASGARD Project Manager, Erik de Schrijver.

The experiment was returned home to be completed on the NAOWA College school farm. The AWB team will also carry out a post flight seminar that would enable the students to plant, observe and analyze the results of the effect of near space weather on the selected Nigerian food crop seeds flown to the edge of Space.

The NAOWA College team is expected to return to Brussels, April 2020 to present the results of their experiment and share their experience with other students from around the world at the next year’s ASGARD programme.

Each participating member of the team was awarded a certificate of participation jointly by the Astronomers Without Borders (AWB) Nigeria, MIRA Public Observatory, Brussels, Sterren Schitteren Voor Iedereen (SSVI), Brussels.

The Astronomers Without Borders (AWB) Nigeria, on behalf of the Team Nigeria, would like to express their profound gratitude to the Chief of Army Staff (COAS) and the President, Nigeria Army Officers’ Wives Association (NAOWA) for making the dream of these bright Nigerian students come to pass and for affording them the opportunity of being worthy Ambassadors of our dear country. 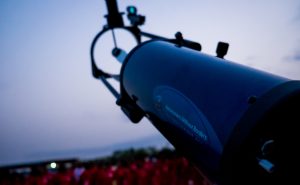